The OC Register and LA Daily News provide an editorial submission that addresses my concerns about the financial viability of California’s cities (see MOORLACH UPDATE — Concordia, Second Harvest and Bottom 50 Cities — November 27, 2019, which also provides the links to the nine previous editions).  The piece addresses the high-risk local government agency audit program and its recently released report from the State Auditor’s Office.

My recent review of California’s 482 cities was based on the Comprehensive Annual Financial Reports (CAFRs) for the year ended June 30, 2018.  Even after waiting until November, there were still some 20 cities that had not issued CAFRs, so I extrapolated. We just received three of these CAFRs and I was not too far off.

The piece also mentions SB 598, my bill that revealed Gov. Newsom’s hypocrisy on digital innovation.  He obviously does not want it when it provides greater access and transparency for municipalities. The Democrats also revealed their hypocrisy with two of my other bills.  SB 535 would have provided more data on greenhouse gases caused by man-made wildfires and SB 584, which would have used existing funding sources to assist in undergrounding electrical lines in high-risk zones.  Both were killed in Appropriations Committees. So much for being concerned about addressing climate change or reducing wildfires.

25th Anniversary Letters to the Editor

Sunday’s OC Register had a couple of fun responses in their Commentary section, reacting to their lead story from the previous week (see MOORLACH UPDATE — 25th Anniversary Story — December 7, 2019).

On December 14th, I received a long correspondence, via fax, from Supervisor Roger R. Stanton, addressed to his fellow Board of Supervisors members.  Here is one paragraph that will give you an appreciation of this four-page directive:

Early last week it became clear that it was necessary to establish a sequential order among five urgent tasks.  This may be subject to second guessing, but it is clear that the following ordering of priorities makes the most sense:  (1) portfolio restructuring and minimization of potential losses, (2) an analysis and reorganization of the Treasurer/Tax Collector Office, (3) creation of a County of Orange Operations Management Team to insure immediate interaction between department heads and the CAO, (4) an Ad hoc, Strike Team of high energy internal professionals to assist the CAO, and (5) the creation of a system to utilize the talent in the broader Orange County community to address the task of  restructuring County government.

“Portfolio restructuring and minimization of potential losses” were buzz words for liquidation; that was the media theme of the day (see MOORLACH UPDATE — LOOK BACKS — December 14, 2009).

The theme dominated the top-of-the-fold headlines.  For the Daily Pilot, it was “County to restructure pool.”  For the LA Times, “O.C. to Liquidate Its Portfolio” and “Orange Starts Asset Sale to Cut Losses” for the San Francisco Chronicle. The Chronicle‘s side story on the front page was headlined “Candidate Predicted Fund Losses — Politics obscured CPA’s warnings.”

Also on December 14, 1994, the OC Register printed a Letter to the Editor from U.S. Representative Christopher Cox, my Honorary Campaign Chair, blasting the LA Times (see MOORLACH UPDATE — Undergrounding In Paradise — May 28, 2019).  This year, Chris Cox joined a few friends and me for lunch on December 6th to reflect back on these events 25 years ago.  For his friendship and amazing service to our nation as an exceptional Congressman and as Chair of the Securities and Exchange Commission, I’m providing his letter below:

A recent Los Angeles Times editorial asks:  “On whose advice did Orange County become the largest municipality in U.S. history to file for bankruptcy?” Whose advice?  The answer is a matter of record: the editorial page of the Los Angels Times.

On June 7, 1994, the Times urged Orange Countians to reject charges that County Treasurer Robert Citron’s derivative investments were imprudent and too risky.  “Citron, the incumbent, has been getting a bum rap from the challenger,” the editorial said in endorsing Citron for re-election.

As the chairman of John Moorlach’s campaign for treasurer, I was impressed with his research and analysis of Citron’s investments.  He made the election a referendum on Citron’s unsound investment strategy.

The Los Angeles Times gave Orange Countians seriously bad advice.  Perhaps the Times should observe a moratorium on further advice and criticism on this subject.

On December 15th, Supervisor Stanton faxed over the press release from Sitrick Krantz & Company.  Here’s the headline and first paragraph:

Orange County announced today that in the first of several auctions to facilitate the orderly restructuring of its portfolio, the County received bids totalling (sic) $7.5 billion for $483 million in securities, which were offered today as the first phase of a $1 billion offering of government agency securities.  The County — through its financial advisors, Salomon Brothers Inc — received bids totalling (sic) 15 times the amount of bonds sold, with the result that bonds traded at tighter spreads and higher proceeds than similar recent trades.

On December 16th, The Wall Street Journal dropped a bombshell with its piece, titled “SEC Probed Orange County Investments Just Months Before the Fund’s Collapse” (see MOORLACH UPDATE — LOOK BACKS & Next Year — December 16, 2009 ).  A quarter-of-a-century later, and Chris Cox would comment on this missed opportunity during our recent lunch conversation.

In its December 16th edition, Congressman Cox informed The Bond Buyer that “he plans to introduce legislation next year that would subject municipal issuers to the same disclosure requirements as corporate issuers, including possible registration.  Cox contends new disclosure requirements for municipal issuers are needed in light of the events surrounding Orange County.” 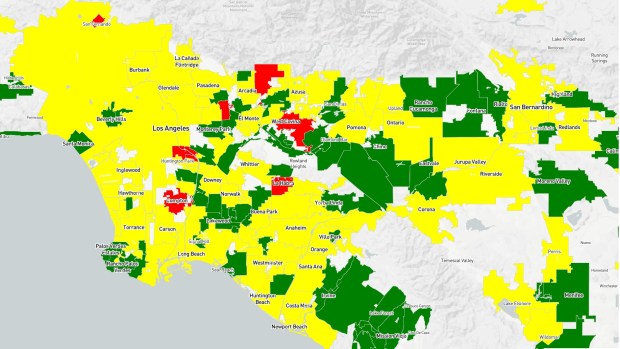 A map created by the state auditor’s office ranks cities by fiscal health. Green is low risk, yellow is moderate risk and red is high risk.

Years after our country emerged from the Great Recession, several Southern California cities have failed to prepare for the next downturn.

In October, California State Auditor Elaine Howle published fiscal health scores for 471 California cities. She found that many were ill-prepared to cover rising pension and other post-employment benefit expenses: a condition that would worsen if a new recession depresses tax revenues and decimates pension fund assets.

The state auditor assigned Compton the lowest score due to its lack of financial disclosure. The most recent audited financial statement on the city’s website is for the fiscal year that ended June 30, 2013. A 2014 audit was published but later retracted after the independent certified public accounting firm withdrew its opinion. Unfortunately, had Compton been able to produce more recent audited financials its score would likely still have been relatively low. Unaudited data that the city provides to the state controller shows Compton has a negative general fund balance, which is roughly analogous to an overdraft on an individual’s checking account.

Several other cities in Los Angeles County ranked in the “high-risk” category because they’re “facing significant financial challenges.” These included (in rank order), San Fernando, San Gabriel, Maywood, Monrovia, Vernon, West Covina, and La Habra — with Victorville ranking just outside that high-risk category. Cities elsewhere in Southern California at risk of distress included Riverside, Fullerton and Santa Paula, which were among the 23 cities in the worst shape.

Some of these cities have previously received unwanted attention related to their poor fiscal management. Maywood, for example, was the subject of a 2016 audit report that cited the city council’s inadequate oversight on city operations and ongoing general fund deficits. Vernon has been previously singled out for having more public employees than residents. Victorville’s defaulted airport authority bonds became the subject of a Securities and Exchange Commission (SEC) complaint, but, more recently, the city caught up on missed interest and principal payments.

Many other Southern California cities performed relatively well. Larger Southern California cities in the upper half of the auditor’s ranking included Santa Clarita, Palmdale, Irvine, Fontana, Moreno Valley, and Oceanside. These cities tend to employ best practices, such as funding infrastructure through the budget rather than borrowing via bonds, writing and abiding by strong financial reserve and rainy-day policies, and encouraging businesses to relocate and remain in their communities.

The highest-ranking Southern California city in the state auditor’s survey was Lake Forest, with the fifth-best score overall. This midsized Orange County municipality has a strong general fund balance and minimal liabilities. Lake Forest also limits its other post-employment benefits by capping retiree health insurance subsidies at $115 per month. This contrasts with many other cities that pay the full health care premium, even for retirees who are receiving $100,000 or more in annual pension benefits.

The state auditor’s survey provides a huge service for California’s local governments and taxpayers, but there are many opportunities for improvement. Taxpayers and governments would benefit if the report’s coverage was extended to other types of local governments, including health care districts and fire protection districts — several of which are under severe fiscal distress and face high pension costs.

Also, for the website’s tools to effectively serve as an early warning system of fiscal distress, cities need to report data faster. The state auditor’s website was launched in October 2019 using data from audited financial statements for fiscal years ending in 2017. The delay is largely attributable to tardy financial filings on the part of some cities even though they are normally required to produce audited financial statements within nine months of the end of their fiscal year.

Adding to the reporting delay is the challenge of gathering the audited financial statements and retyping relevant values into the scoring model. State Sen. John Moorlach, R-Costa Mesa, tried to address this issue by introducing Senate Bill 598, which would have begun a transition toward “machine-readable” financial statements. Although SB598 unanimously passed both houses of the state legislature, Gov. Gavin Newsom vetoed it.

Nevertheless, the state auditor has given cities and taxpayers important new accountability tools. This effort should draw attention to both the best- and worst-performing city governments and allow best practices to be developed to improve the financial stability and efficiency of governments.

Marc Joffe is a policy analyst at Reason Foundation (www.reason.org).

Make a movie about it?

Re “How Orange County went broke” (News, Dec. 8): Kudos to Teri Sforza for an absolutely riveting action adventure tale about how one of the richest counties in America managed to go bankrupt.

What an incredible movie this would make! Oh, wait. The villain was a government bureaucrat and not an evil private business tycoon. Never gonna happen.

Re “Lessons from O.C.’s 1994 bankruptcy “ (Opinion, Dec. 8) and “How Orange County went broke” (News, Dec. 8): Bravo to the newspaper for publishing both an article from Sen. John Moorlach and a front-page history about the great Orange County bankruptcy.

As a cautionary tale for reckless politicians it has no equal. And I’m grateful that in Moorlach, who is a CPA, we still have someone qualified to stand on the state Senate floor to teach Democrats math.