This was followed by a response from Will Kempton, former Director of Caltrans and the Orange County Transportation Authority (while I served on its Board), (see http://www.foxandhoundsdaily.com/2016/05/can-no-longer-ignore-crumbling-transportation-infrastructure/).

After reading Will Kempton’s piece, some memories flashed back. Accordingly, we decided to review the testimony that was given during the presentation of my bill, SBX1-9 (see MOORLACH UPDATE — Cost of Engineers — August 26, 2015 august 26, 2015 john moorlach). Consequently, we put together clippings from that effort (see It’s Time to #FixCaltrans – YouTube or https://www.youtube.com/watch?v=EpAJPHccPkk&feature=youtu.be).

I also put together a quick summary of concerns, which is provided in Fox & Hounds in the piece below.

Speaking of Caltrans, SB 1397 did not sit well with me. The LA Times covers it electronically in the second piece below. The bill was authored by Sen. Bob Huff. When someone within your own caucus has been working diligently on a bill, it’s not fun to oppose it. In fact, it is a rarity. When it appeared on Wednesday’s agenda, I politely told Sen. Huff that I planned to speak against the bill and even asked for his permission to do so. He said that I could and then held the vote over to Thursday.

There was plenty of lobbying between Wednesday morning and Thursday. I spoke against the bill, but instead of urging a "no" vote, I urged caution. Out of respect for Sen. Huff, I even laid off of the bill and did not vote for or against it. But, he was having trouble with the other Senators, as well. It made for intriguing Floor debate when a Republican Senator exclaimed "Aye to No," only to have a Democrat Senator, exclaim the opposite.

This is a bill that I have enjoyed debate on with one of my e-mail subscribers. After a few e-mail exchanges, I was convinced that this was not an appropriate utilization of freeway information signs. So, Larry, this one was for you.

The third piece is the concluding remarks that come out of Jerry Sullivan’s weekly column in the Orange County Business Journal. I recognized the OCBC as the small business of the year (see MOORLACH UPDATE — Open-Government Bill — May 28, 2016 may 28, 2016 john moorlach). Jerry arrived a little early and, for whatever reason, my calendar had a big break in it when he arrived. So, I gave him a quick tour of the Capitol, from which provides his observations

BONUS: Thursday I took a stretch break and leaned against one of the Senate Chamber’s columns. It was caught by the world famous photographer, Rich Pedroncelli of the Associated Press.

State Sen. John Moorlach, R-Costa Mesa, listens as lawmakers debate a bill Thursday, June 2, 2016, in Sacramento, Calif. Legislators poured through dozens of bills Thursday as they worked to get bills out of their house of origination before Friday’s deadline. Rich Pedroncelli AP Photo

Last week, Will Kempton, Executive Director of Transportation California and former Director of Caltrans published a response to Jon Coupal, President of the Howard Jarvis Taxpayers Association, in a Fox & Hounds piece stating that, “…in spite of all the recent audits and criticism, the organization [Caltrans] employs competent people who want to serve the public well.” In the same piece he highlighted the need to address California’s transportation funding crisis and provided one solution: Raise your taxes even higher.

There is no doubt that there are many fine and capable Caltrans employees who simply want to build and maintain our state’s highway system. What Kempton missed was the incredible dysfunction at Caltrans and tries to deflect any criticism of the department. He of all people knows how bad it really is at Caltrans, and for those who are unaware of the facts, his echo to raise taxes for transportation spending might seem like the only viable option. However, reports concerning a very dilapidated Caltrans are replete with criticisms of its inability to provide details for budget reviews and audits by either the LAO or the State Auditor.

We’re told the Governor and the Secretary of Transportation are serious about fixing California’s roads, but can you mention one initiative to actually fix Caltrans? All I hear is cries for more tax increases.

Allow me to review a few facts revealing the competency level at Caltrans:

Left up to the Governor and the legislature, it will be YOU, the taxpayer, who will be asked to fund a “pothole” tax. I hate to break it to you, but you’re being taken to the cleaners. You are the victim of intentional infrastructure neglect. This literally is “highway robbery.” The fix is in. And the answer is you and your wallet.

California’s leadership should be sincere in its pursuit of better roads. Fix Caltrans. Taxpayers should expect no less. 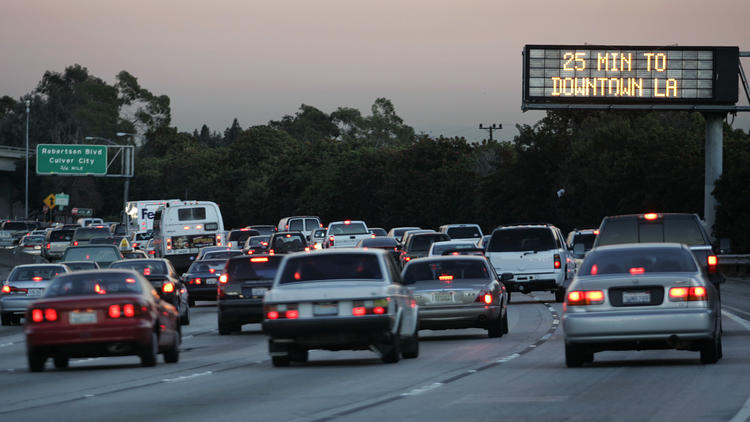 However, opponents of the measure said Friday that they would not be surprised to

see the proposal brought back next year.

The measure by Sen. Bob Huff (R-Diamond Bar) failed Thursday on a 19-17 vote,

two votes shy of the majority needed for passage in the Senate.

million annually for maintaining or upgrading the electronic signs and repairing

“There is no debate that we have highway maintenance and repair needs,” Huff told

But Sen. John Moorlach (R-Costa Mesa) said he worries about the commercial

ads leading to motorists “driving while being distracted,” and would undermine the

public service purpose of the signs.

“If we don’t use the tools for their intended purpose, then over time their real use

will be minimized or ignored,” Moorlach said.

The bill was also opposed by Dennis Hathaway, president of Los Angeles’ Coalition

to Ban Billboard Blight. “It’s a terrible idea to put advertising on the signs,”

“Putting them right in the line of sight, having that kind of potential distraction, is

unsuccessfully before to gain access to them, Hathaway said he does not think the

Huff bill is the last try.

“This is a case where bad ideas never die,” Hathaway said.

Congratulations to the whole crew of the Business Journal—from the newsroom to the sales, marketing and events staff, the production crew, and the circulation and financial folks. Every aspect helped earn a California Small Business of the Year Award last week in Sacramento, where state Sen. John Moorlach bestowed the honor for the 37th District. A walk through the Capitol offered evidence that Moorlach is showing Sacramento the unique blend of bean counter/policy wonk/people person that has made him a formidable public servant, as well as a favorite of regular folks here for 20 years. He’s 6 feet 5 and became the tallest of the Senate’s 40 members upon his election to the body last year, but the big fella hasn’t gone big shot—something the Insider noted when Moorlach greeted the elevator operator in the Capitol building by name, extending the elderly gentleman the same courtesy he gives fellow legislators.

If you no longer wish to subscribe, just let me know by responding with the request to do so.